My BEST Vegan Cinnamon Rolls – The ultimate recipe for a fluffy, perfectly sweet, and melt-in-your-mouth result!

After practicing this recipe a lot the last 2 years I’ve made my own dream vegan cinnamon recipe. In the beginning I though the vegan result would never turn out as good as the ‘traditional’ cinnamon bun recipe. Which is typically not dairy-free and filled with conventional butter, eggs and milk. BUT, it turns out to be a big lie.

I’ve made this recipe for family, friends, my neighbor (I know, very comfy neighborhood) and my colleagues at work – and no one have ever articulated or noticed anything about these are vegan.

Sorry, I know I sound quite excited about this recipe .. But it’s just because I know how good these are! It takes about 2 hours preparing and 20 minutes to bake in the oven.

You get an even more fluffy result if you let the buns rest overnight before baking (they will raise about double size!). But the instructions will come later on..

What I’m trying to say is that it’s not ‘2 active hours’ in the kitchen. You’ll need to prepare a bit – and then there’s a lot of waiting time. But I guess that’s the same with buns, bread or other good bakery! Patience is needed 😉 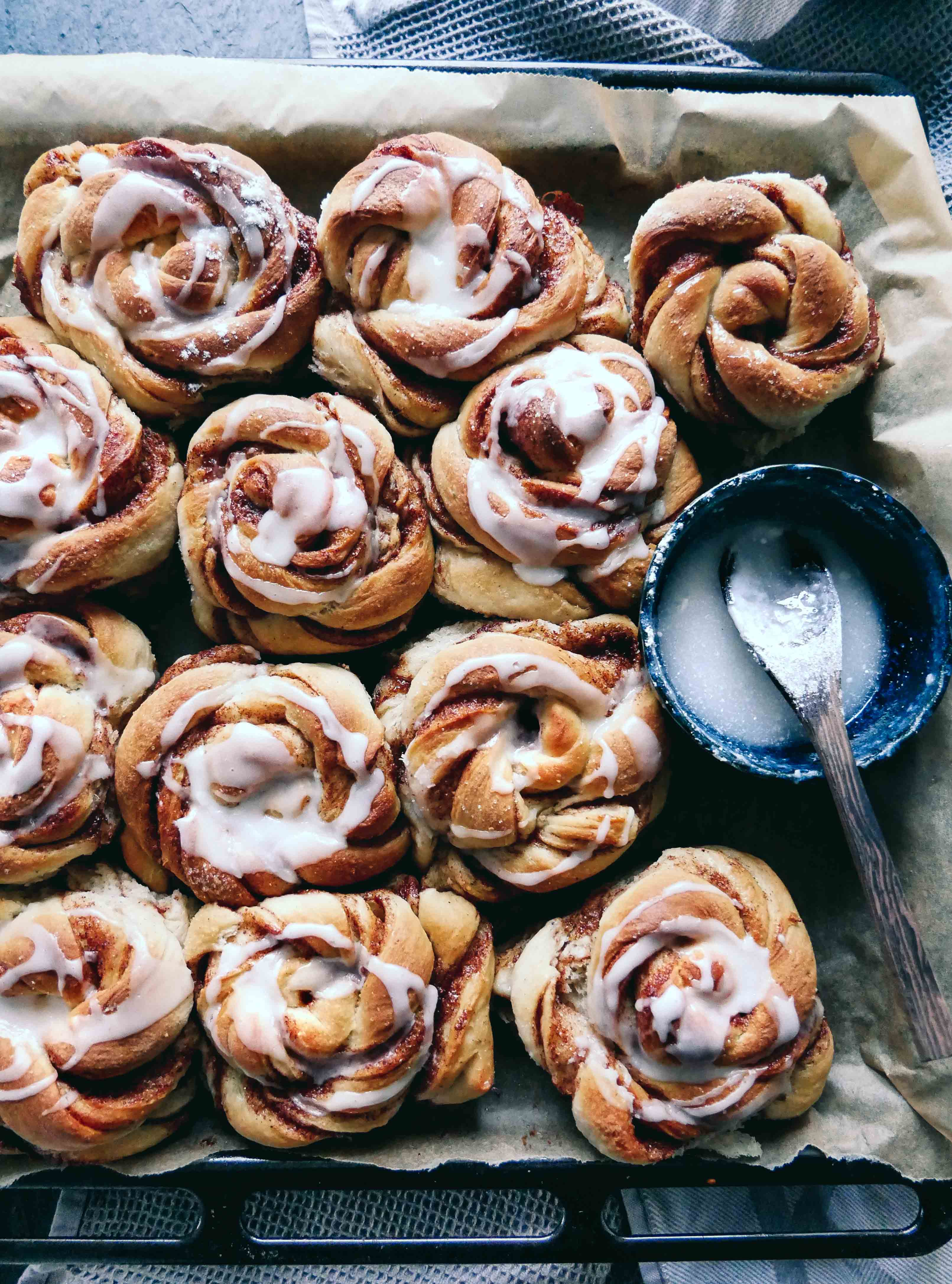 Preparing: Start by adding milk and yeast into a high powered blender. I use to mix this with my hands.

Add cardamon, sugar, salt and 500g. flour. Start to mix slowly, afterwards turn up the speed. Slowly add the last 500g flour into the blender. Mix on high level in 4-5 minutes until the dough is sticky and coherent. (You'll need to be a little patient here.)

Cut the butter in small cubes. When the dough is sticky and coherent add the small butter cubes one by one while the blender is still mixing. When all the butter is added and the dough is blank and sticky on the outside it's done. Cover the bowl with a clean dishtowel and let the dough rise for 1 hour.

Make the Cinnamon Sauce. Warm the butter a few seconds. Mix the melted butter with cinnamon and sugar with a spoon. I use to place the cinnamon sauce in the fridge. It will be more easy to work with later on.

Drizzle some flour on a clean surface on the kitchen table. Take out the dough on the table. Form the dough as a big rectangle and add the cinnamon sauce on top - See the pictures below. Wrap the dough in 3 layers and cut in lines. Form the rolls and place them on a baking tray covered with baking paper. Cover with dishtowels and let it rest at least 1 - 1,5 hour (You can also leave them like this overnight).

Baking: Preheat the oven at 180C (350F) degrees. Add some Coconut Butter or Coconut Oil on top of the rolls. Drizzle with a little sugar too.

Bake the Cinnamon Rolls in the oven in 16-18 minutes until they have a nice golden color. Cool down and add white glaze or chocolate sauce on top!

Read more about my dough, rest and baking tips here. I’ll give you my best tips and tricks for perfect baked bread. I think you can make these rolls good with half of the waiting time. But if you want a good fluffy result with soft and thick buns, then you’ll need to be patient.

Also, make sure you tag me on Instagram @micadeli_  if you recreate any of these recipes. I would love to see your photos!

.. But how to make Vegan Cinnamon Rolls?

As said in the beginning this recipe is vegan, which means no eggs or conventional milk or butter is used. Only naturel vegan ingredients. I’ve made a picture below that shows you my process and how I use to make them!

.. And now the fun part begins! When you’re ready with picture number 4 and have 3 layers of cinnamon dough, you are now ready to fold them. You can fold them like traditional rolls just turn them around like ‘snail’. But I decided to make these like ‘Swedish Kanelsnurrer’ – which is a very popular pastry here in Denmark too.

This means that you cut your dough in parallel lines around 1 – 1,5 cm. thick. Keep left hand on the left side of the piece and roll the right end with your right hand on the table. Now you should have a beautiful swirl look like the picture below ↓

The cinnamon rolls are now ready to be baked. Cover them up with a little juicy Coconut Oil on top. Use a spoon og kitchen brush. Bake in the oven for about 20 minutes until crispy and light-golden.. Mmmh, can almost smell the buns here right now!

These unbaked rolls down here ↓ was made in the evening.. Then I waited about 8-10 hours so they could rest on the baking tray covered with a dishtowel. All worth the waiting time – they gets to fluffy and thick in the consistency!

Any toppings for Vegan Cinnamon Rolls?

You can easily eat these just the way they are! Coming warm out of the oven they are so sweet and gives a melt-in-your-mouth result!
But warm chocolate sauce on top of the cinnamon buns should be good too! Some add a little popped quinoa, or roasted hazelnuts as well. The hazelnuts doesn’t need to be toasted before using, because when you put them on top on the cinnamon rolls they’ll get toasted in the oven too. Enjoy the recipe eating them directly warm from the oven. This dough is just so good – and it’s a perfect thing to make in this autumn or winter season and those cold months coming up!

I really hope that you can use this recipe! Just let me know in a comment below, if you have any questions making it.
Did you like this recipe? Rate it here ↓

This site uses Akismet to reduce spam. Learn how your comment data is processed.

Hi, I’m Michala. I work as a food photographer – and cook simple vegan recipes.
Healthy and simple food with whole grains, good fats, fruit and vegetables! I love almost every kind of vegetables, and can not live without pasta, sourdough bread and coffee.
→  More about me here

→ If you make this recipe, be sure to tag @micadeli_on Instagram. ♥